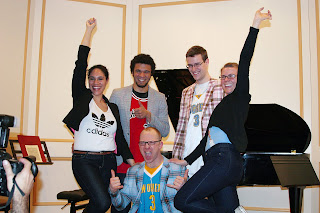 The staff of the Norwegian music publisher Musikk-Huset A/S have visions, they are creative and bold. Two days ago they just launched a New York Music Series at the wonderful WMP (Workshop for music performances), down town New York - with the intention of introducing historical and contemporary Norwegian music to NYC. And the New York City-audience filled up the concert hall when PUBLIQuartet and I played ball in NBA jerseys and Moods of Norway-design with Grieg, Debussy, Kolstad, Webern and Scubert. 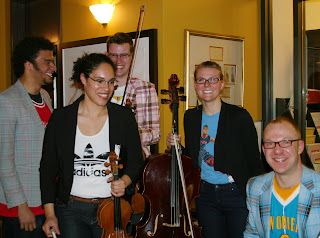 As host, this was my introduction:
"Ladies and gentlemen of the NBA music lover audience. Welcome to something that might look like a basketball game, but it´s more of a game of music rather than a game of sports. However, we´d like to show you the althetizm in music, and the music in sports.

I have allways dreamt of becoming an NBA basketball player. But I guess I was to short. I´m Norwegian. We´re Vikings. My ancestors were very short. But never the less, I DID play basketball when I was younger. And I realized that it ain´t really that much of a difference bethween the game of basketball and the game of music. They both need presition, creativity, teamwork, technical ability and artistic performances" 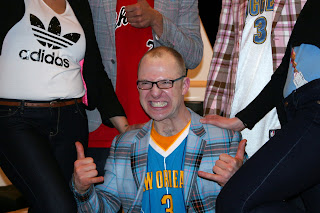 More photos and videos from the actual performance coming soon, so stay tuned :)
Also - check out this weeks news letter by Michael Holtermann
http://holtermanndesign.com/HDnews/2011/3/
Oh, and ps: Next concert at the WMP nr 2 of 3, is on May 20th at 7 pm. Starring the Norwegian soprano Isa Katharina Gericke:)
Lagt inn av Aksel Kolstad kl. 08:12