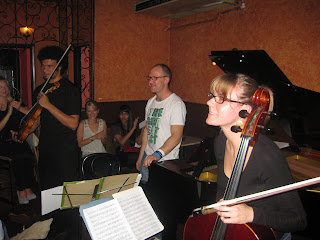 Yesterday evening was a super Café de Concert concert at Caffe Vivaldi, New York! I performed with the magnificant Curtis Stewart and Amanda Gookin. Kicked the party off with Bartok´s 6 Rumanian dances, the continued with Schumann´s Fantasiestück before wrapping up with the piano trio by Debussy which he wrote when he was 18, just a teenager! The crowd at Vivaldi was great as usual, and after Debussy - the audience turned in to a rock concert-audience! Rock on!!